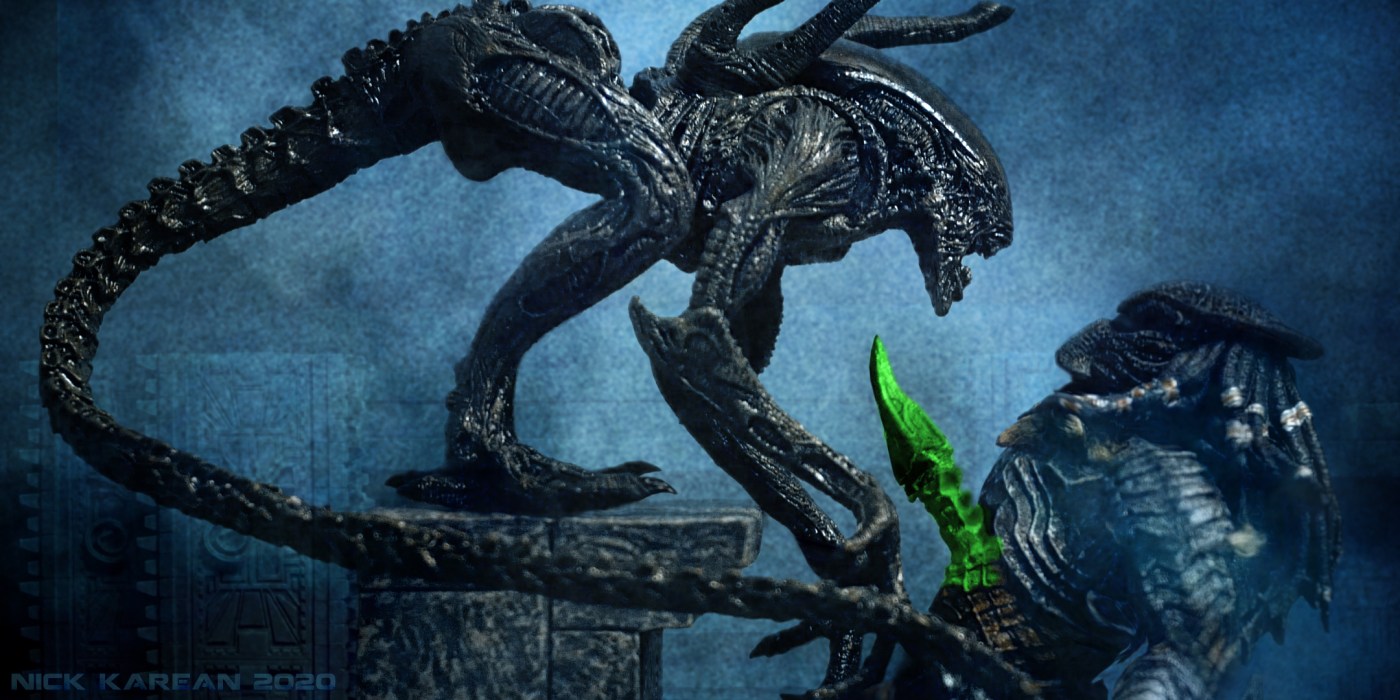 Inspired by the AVP: Alien vs. Predator film, I used NECA & McFarlane action figures for this photography project.

The featured photo was inspired by the AVP: Alien vs. Predator film. I used a four-inch McFarlane action figure for this project. It’s the pyramid chamber fight scene from the movie when the Chopper Predator convulsed as his green luminescent blood is shed from being violently stabbed from the back.

The wicked sharp point and barbed tail of an alpha Xenomorph Alien pierced through the Yautja’s (Predator) armored chest as it lifted the impaled Predator face to face before brutally head-biting right through its bio-mask, skull, and brain.

Based on the film, the alpha Alien Xenomorph, later called Grid, was born in a Yautja pyramid beneath Bouvet Island. Its name, Grid, comes from the gridlike battle wounds on its head and shoulders caused by the constricted Celtic Predator’s metal net.

Grid killed both Chopper Predator and Celtic Predator, who had come to the Pyramid to hunt Xenomorphs as part of an initiation hunt. Grid also freed the Queen Xenomorph held captive by the Predators deep within the pyramid.

I used NECA’s Grid Alien Xenomorph for this one…

Their designs are magnificent. If this was them in a death metal concert, with them holding cool Xenomorph electric guitars while throating vocals with their natural guttural death growls and shrieks, that’ll be awesomely cool!

H.R. Giger was responsible for creating these horrifying yet beautiful Xenomorph designs. Alien film director Ridley Scott said, “They were quite specific to what I envisioned for the film, particularly in the unique manner in which they conveyed both horror and beauty.”

Matt Domino, Editorial Director from Artsy, described H.R. Giger’s designs perfectly when he wrote, “If you don’t know the Xenomorph by name, you know it by sight: the black, eggplant-shaped head; the dripping stalactite teeth; the sleek, spiky body and the weaponized tail that can appear strangely human”.

Inspired by the original artwork of Robert Gardner @ Art of GARD below, I recreated this nightmarish scene using all of my Alien Xenomorph collection and the Private Hudson action figure being surrounded in close proximity by those wicked parasitical nasties.

Imagine being surrounded by these horrifying creatures in real life, and you run out of ammo… what else is there you can do but agree with Private Hudson when he said… “Game over, man! Game over!”

As with the earlier photos above, I shot the action figures for this one on a green screen with the Panasonic Lumix GH4 camera + Olympus 40-150mm f/2.8 PRO Lens and edited it using Adobe Photoshop & After Effects CC…

I found some images of the Crimson Predator on Facebook. It was a NECA customized Celtic Predator action figure by this guy from Thailand, Watchrin Bird Hanshin. I re-edited it a little more, added additional visual effects, and color-graded it to make it even more vicious in its Japanese Samurai warrior-style Yautja…

I wanted more of this, so I began scouting for suitable locations to shoot my Chopper Predator action figure and make it look like he was on his home planet. My reconnaissance mission led me to discover this cool location in Puncak Alam, Kuala Lumpur (KL), which looked almost like it was on another planet. It was time to take my Yautja out for a road trip and do a shoot there right away…

I take some action figures with me every time I travel. This time, I took this shot in the hills of Genting Highlands in Pahang. I imagined a battle ensued between the alpha Alien Xenomorph, Grid vs. the Jungle Hunter Predator, where it didn’t end well for the Yautja. It was a cataglottism kiss of death!

Until next time, rest in peace…